After declaring, essentially out of nowhere, that he had a program to end the disease of aging, renegade biogerontologist Aubrey de Grey knows how the first three steps of Gandhi’s progression feel. Now he’s focused on the fourth.

“I’ve been at Gandhi stage three for maybe a couple of years,” de Grey said. “If you’re trying to make waves, certainly in science, there’s a lot of people who are going to have insufficient vision to bother to understand what you’re trying to say.” 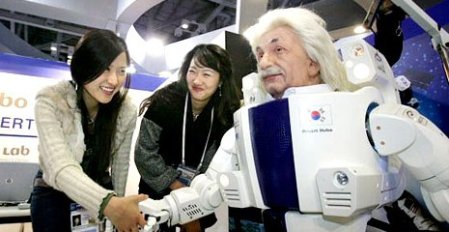 Four leading Japanese robotic companies have joined forces to outcompete South Korea, which recently announced legislation to develop more robots for common household use.  Although Japan has long led the world in robo technology, so called intellegent service robots have been slow to penetrate the average home.  But some have high hopes, “We believe house hold robots will finally become common in the near future, within five years the number of robots will increase ten fold or more…”.  According to the Associated Press the South Korean government aims to put a robot in every household by 2020, and has mobilized companies and scientists to help integrate robots into Korean society.  Faced with low birth rates and long life spans both Japan and South Korea are turning to robots to replace workers.

“Whoohoo! Was keeping my eye on some chunks of bright stuff & they disappeared! Sublimated! So it can’t be salt, it’s ice.” That’s the triumphant verdict of the Mars lander Phoenix, which yesterday boldly declared, after 24 Martian days of scratching the planet’s surface, that yes, there is ice on Mars.

Phoenix is constantly sending back information to Earth, which is posted by the mission team using the instant messaging software Twitter (written, in touchy-feely style, in the first person as if Phoenix itself is providing its own commentary on its labours). Twitter, the ‘microblogging’ phenomenon, can thus claim to have brought the watery news to Earthlings’ attention.

An American military supercomputer, assembled from components originally designed for video game machines, has reached a long-sought-after computing milestone by processing more than 1.026 quadrillion calculations per second. The new machine is more than twice as fast as the previous fastest supercomputer, the I.B.M. BlueGene/L, which is based at Lawrence Livermore National Laboratory in California. The new $133 million supercomputer, called Roadrunner in a reference to the state bird of New Mexico, was devised and built by engineers and scientists at I.B.M. and Los Alamos National Laboratory, based in Los Alamos, N.M. Having surpassed the petaflop barrier, I.B.M. is already looking toward the next generation of supercomputing. “You do these record-setting things because you know that in the end we will push on to the next generation and the one who is there first will be the leader,” said Nicholas M. Donofrio, an I.B.M. executive vice president. By breaking the petaflop barrier sooner than had been generally expected, the United States’ supercomputer industry has been able to sustain a pace of continuous performance increases, improving a thousandfold in processing power in 11 years. The next thousandfold goal is the exaflop, which is a quintillion calculations per second, followed by the zettaflop, the yottaflop and the xeraflop.

Portal – The game consists primarily of a series of puzzles that must be solved by teleporting the player’s character and other simple objects using the Aperture Science Handheld Portal Device, a unit that can create an inter-spatial portal between flat planes. The player character is challenged by an AI named “GLaDOS” to complete each puzzle in the “Aperture Science Enrichment Center” using the Portal Gun with the promise of receiving cake when all the puzzles are completed. The unusual physics allowed by the portal gun are the emphasis of this game.

Echochrome – The game involves a mannequin figure traversing a rotatable world where physics and reality depend on perspective. The world is occupied by Oscar Reutersvärd’s impossible constructions & The concept is inspired by M. C. Escher’s artwork. The game is based on the OLE Coordinate System developed by Jun Fujiki—an engine that determines what is occurring based on the camera’s perspective.

“We’re not proposing that they change the positions of the arms,” said Robert Benjamin of the University of Wisconsin, Whitewater. “What we’re proposing is a change in the emphasis of the arms.” Benjamin will present his team’s results today here at a meeting of the American Astronomical Society (AAS).

The findings confirm an earlier observation by a team of astronomers, making a strong case that the Milky Way has two major spiral arms, a common structure for galaxies with bars. These major arms have the greatest densities of both young, bright stars and older, so-called red-giant stars.

The Singularity: A Special Report

Across cultures, classes, and aeons, people have yearned to transcend death. Bear that history in mind as you consider the creed of the singularitarians. Many of them fervently believe that in the next several decades we’ll have computers into which you’ll be able to upload your consciousness—the mysterious thing that makes you you. Then, with your consciousness able to go from mechanical body to mechanical body, or virtual paradise to virtual paradise, you’ll never need to face death, illness, bad food, or poor cellphone reception.

Now you know why the singularity has also been called the rapture of the geeks.

The singularity is supposed to begin shortly after engineers build the first computer with greater-than-human intelligence. That achievement will trigger a series of cycles in which superintelligent machines beget even smarter machine progeny, going from generation to generation in weeks or days rather than decades or years. The availability of all that cheap, mass-­produced brilliance will spark explosive economic growth, an unending, hypersonic, tech­no­industrial rampage that by comparison will make the Industrial Revolution look like a bingo game.